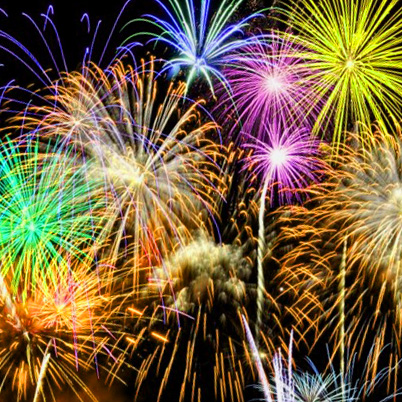 As Americans celebrate Independence Day this July 4th, the explosive tradition of fireworks will brighten the night skies. It’s estimated by the American Pyrotechnics Association that almost 300 million pounds of fireworks will be used over this holiday, with people enjoying a wide variety of colors and effects during their fireworks displays.

The firework colors that will cause awe and enjoyment this Fourth of July will come from black powder mixed with different dried chemicals and compounds that have been processed into a powder. Much like mixing paints, mixing the dried chemical powders will give a range of different colors that the fireworks maker can use to create an incredible explosion.

What dried chemicals and elements go into a firework to create the colors?

Black powder is the fuel that ignites to create the actual explosion and causes the other chemicals and elements to burn hot enough to be seen from the ground. It is made from a mix of potassium nitrate, sulfur, and charcoal.

Strontium is a soft earth metal that burns with a bright red color when used in fireworks and is also the chemical used to give road flares their red color. When chemically processed, it can be converted to strontium salts such as Strontium Chloride, Strontium Nitrate, Strontium Carbonate, and Strontium Sulfate.

Calcium is the third most abundant metal in the Earth’s crust and is used in fireworks to make an orange explosion in the display. It is typically processed to be in the form of a calcium salt such as Calcium Carbonate, Calcium Chloride, or Calcium Sulfate.

To make a yellow color in a firework there’s no need to look past a kitchen since the color comes from the common sodium salts. Sodium Bicarbonate (Baking Soda) and Sodium Chloride (Table Salt) are the most commonly used, but Sodium Nitrate is also used.

Barium is used to make bright green explosions, but because it is reactive to air and other compounds it is chemically processed into a barium salt such as Barium Chloride, Barium Nitrate, and Barium Chloride.

When copper metal oxidizes it creates a blue/green patina, which is why copper salts are used to make the sky light up with blue. These are found in Copper Chloride, Copper Carbonate, and the oxides that create the patina.

To create the glaringly bright white and silver explosions in fireworks, dried metal powders of magnesium, aluminum, and titanium are used. These are actually an issue in manufacturing plants where dried metal dust can accumulate into explosive levels.